Last month, Michigan Governor Rick Snyder signed a bill that expands the 10 Cents a Meal for School Kids & Farms program. The program, which began in 2016 and is endorsed by the Michigan Good Food Charter and supplements the Healthy, Hunger-Free Kids Act of 2010, provides participating school districts with up to 10 cents in match funding per meal to purchase and serve locally produced fruits, vegetables, and legumes. A 2016-2017 report on the program’s pilot found that it promoted both health and gave a boost the local economy: over $100,000 was spent on local produce from farms while school meals incorporated a wider range of fruits and vegetables. By the second year, the program introduced 95,000 students to 65 different types of healthy food options.

This week’s chart illustrates how the expansion of the 10 cents program will advance health equity by supporting the state’s youth and farmers, regardless of race or income. Initially serving Northwestern Michigan, the program expansion covers counties in the Southeastern region, including the cities of Flint, where 67 percent of youth of color are living under 150 percent of the poverty level, and Battle Creek, where Black, Latinx, and Mixed children are almost twice as likely as White children to live in poverty. The pilot program operated in Regions 2, 4, and 9 where the percentage of people of color is as low as five percent in Waxford County. The expansion will include Regions 6 and 8 where it will have the potential to serve more low-income, students of color. Importantly, the program does not include Wayne County (home to Detroit), where the population is over 50 percent people of color. 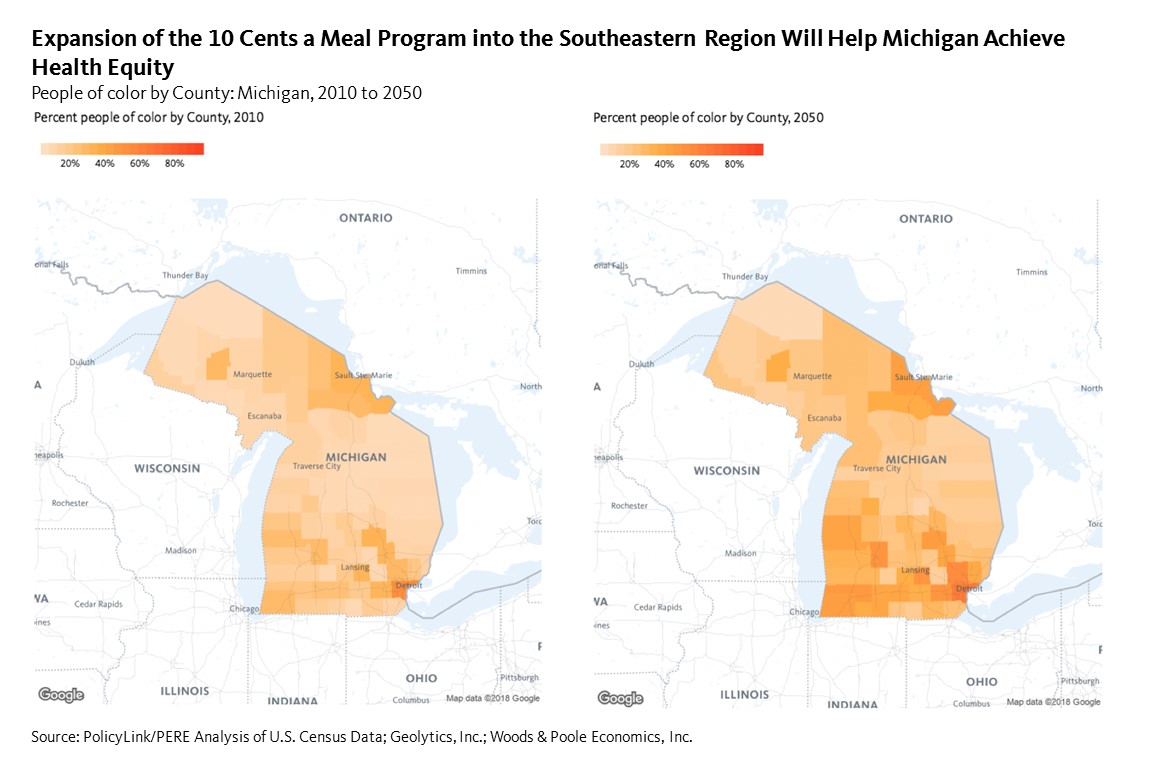 Studies show that when students are offered a healthier school lunch, they begin to adopt healthier eating behaviors. Children who are exposed to fresh produce early in life are likely to continue healthy eating patterns into adulthood and access to fruits and vegetables is a major component of preventing chronic health conditions like obesity.

The expansion of the program is one of many necessary solutions to ensure that all state residents can live a healthy life, regardless of racial identity or income. Across the country, advocates and organizations are seeking and developing strategies to ensure that students have access to local, healthy foods in and out of the classroom.  Michigan ranks 16th in percent of adults who are overweight or obese, and people of color are more likely to be obese compared to their white counterparts. Expansion into Southeastern Michigan will reach more youth of color and is an intervention to lower future rates of adulthood obesity. Addressing and eliminating the persistent health disparities among racial groups would further racial and ultimately economic equity.

To see how race is distributed by county in your state, visit the National Equity Atlas and type in your state. Download and share your map on social media using #equitydata.