In the face of widening inequality and persistent racial economic gaps, Mayor Marty Walsh is implementing a new approach to achieving shared economic prosperity in Boston. Bolstered by the support of a powerful advocacy coalition and detailed data on financial inclusion, in 2014 Mayor Walsh opened a new Office of Financial Empowerment. “Whatever it is that we’ve been doing for the past 10 to 20 years may have helped,” program director Trinh Nguyen told Next City, “but it’s not denting inequality and access.” The Office of Financial Empowerment aims to move the city forward by providing financial empowerment services to those who need them most: low and middle-income Bostonians who’ve not benefited from recent growth.

Financial vulnerability is widespread and bad for Boston’s economic future

Family Assets Count, a coalition of local financial empowerment advocates along with national institutions CFED and Citi community development worked to bring financial security and detailed data on financial instability across Boston’s diverse communities to the city’s attention. Family Assets Count defines financial instability as the inability to cover basic expenses for three months after a major life disruption like a job loss or health crisis. An inability to save and invest in the future is not only harmful for individual families, it contributes to the rising inequality that is threatening sustained economic prosperity. 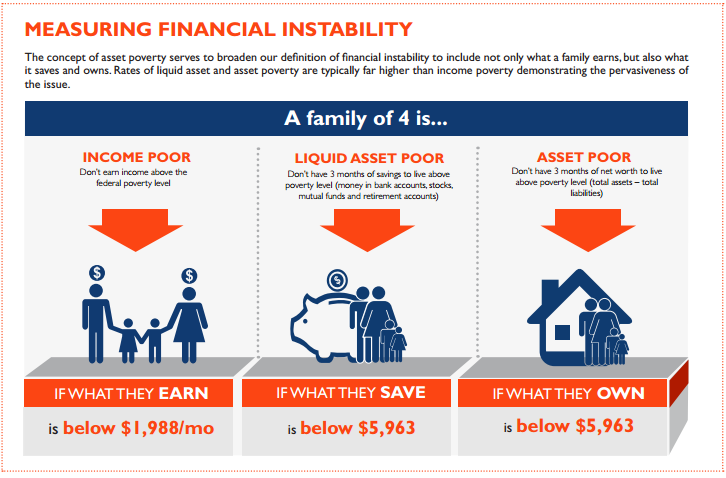 Family Assets Count, in partnership with the Midas Collaborative (a statewide asset-building organization), examined the data and found that financial insecurity in Boston is widespread. While the traditional income-based poverty measure estimates that 17 percent of Bostonians live below the poverty line, this measurement underestimates the 46 percent of Boston residents who are vulnerable to financial collapse should they experience normal life disruptions (download the Family Assets Count data profile of Boston).

The prevalence of liquid asset poverty in Boston closely resembles national trends: an estimated 45 percent of households are liquid asset poor. When almost half of families don’t have savings, they can’t invest in their children’s education or their own retirement. Such anemic investment in the future undermines economic growth and prosperity — in Boston and in cities across the country.

While Bostonians of all levels of educational attainment experience financial insecurity, those without college degrees are much more likely to be financially insecure. About seven of every 10 residents without more than a high school degree are liquid asset poor compared with 25 percent of those with bachelor’s degrees.

The City of Boston has undergone a profound demographic shift over the past several decades and is now a majority people-of-color city. Yet Boston’s communities of color are far more likely to be financially insecure: 69 percent of Black households and 75 percent of Latino households are liquid asset poor compared with 29 percent of Whites. Latinos are the fastest-growing population in the city but they also have the highest rates of liquid asset poverty at 75 percent. Without strong and effective financial inclusion strategies, Boston’s economic future looks bleak.

Given Boston’s growing economy, creating pathways to opportunity and prosperity for the 46 percent of Bostonians who are financially insecure is an economic and moral imperative. In an interview with WBUR, one of Boston’s National Public Radio news stations, Mayor Walsh said: “We have a city that is doing very well [and] a lot of people are doing well in our city, but we still have half our residents that aren’t and we have to really try and assist them and help them prosper during these good economic times.”

The Office launched three Financial Opportunity Centers in partnership with United Way and Local Initiatives Support Corporation (LISC). These centers provide a range of services including: financial coaching, job search and advancement support, tax filing support, and help applying for benefits. Two similar centers, run by United Way, demonstrated significant results last year. According to the City of Boston, “77 percent of clients at those centers who completed pre- and post-assessments reported increases in one or more of the following measures: net income, net worth, or credit score.”

The power of data in the hands of a strong coalition

Financial insecurity data can be paradigm-shifting for communities and policymakers, like Mayor Walsh, who want prosperity for all but don’t have a clear picture of who’s being left out and which communities need to be lifted up to get there. Community advocates in the Midas Collaborative have been working toward equitable growth and financial security for all residents knowing full well the extent of the city’s existing inequities. The Family Assets Count data helped make the problem urgent and undeniable. Margaret Miley, executive director of the Midas Collaborative, said “the data provided an opportunity to frame the urgency of the problem and to focus a broad group of stakeholders for action.”

Following in Boston’s lead, financial inclusion strategies are ramping up across the country. Family Assets Count is partnering with organizations in nine other cities to implement some of these municipal strategies for financial security, including: Chicago, Houston, Miami, Sacramento, Los Angeles, Washington, DC, Oakland, the Bronx (New York City), and Newark. In addition to working closely with these 10 cities over the next two years, Family Assets Count features estimates of financial inclusion for thousands of cities and counties on their online mapping tool — find out how your city is doing [here].