Removing barriers that prevent people of color from starting and growing successful businesses is a crucial inclusive growth strategy. Entrepreneurship is an important pathway for building wealth and addressing the racial wealth gap, as well as for providing self-employment and income. Entrepreneurs of color also play a major role in creating employment opportunities: research shows that entrepreneurs of color are more likely to hire people of color and locate their firms in communities of color.

While businesses owned by people of color today make up a significant and growing share of businesses in cities across the country, entrepreneurs of color remain underrepresented in business ownership – particularly among high-revenue firms and firms with paid employees. Historic and present-day racial discrimination has contributed to racial inequities in business ownership and growth. The racial wealth gap makes it more difficult for people of color to start a business in the first place, and lack of access to capital adds to the challenge.

To help communities understand how they are doing on racial equity in entrepreneurship, the National Equity Atlas now includes four new indicators of entrepreneurship. These indicators are based on data  from the Census Bureau’s Survey of Business Owners, a twice-a-decade survey designed to paint a picture of all firms — incorporated or not, with and without paid employees — with annual receipts of $1,000 or more by race, ethnicity, and gender. This survey represents the only data source with sufficient sample sizes to examine race and gender equity in entrepreneurship for all the geographies available in the Atlas, including the largest 100 cities. The latest data on the Atlas is from 2012 – after which point the survey was discontinued and is soon to be replaced by the Annual Business Survey.

Using this data, we examined the representativeness and growth rates of Black-owned businesses in the nation’s 10 largest cities (based on 2010 population) from 2007 to 2012. We focused on cities because many policies that foster entrepreneurship, from tax incentives to small business loan programs operate at the city level. We examined how the largest 10 cities measure up when it comes to measures of growth and success for Black-owned business. We focused only on firms with paid employees due to their greater economic impact on local economies. 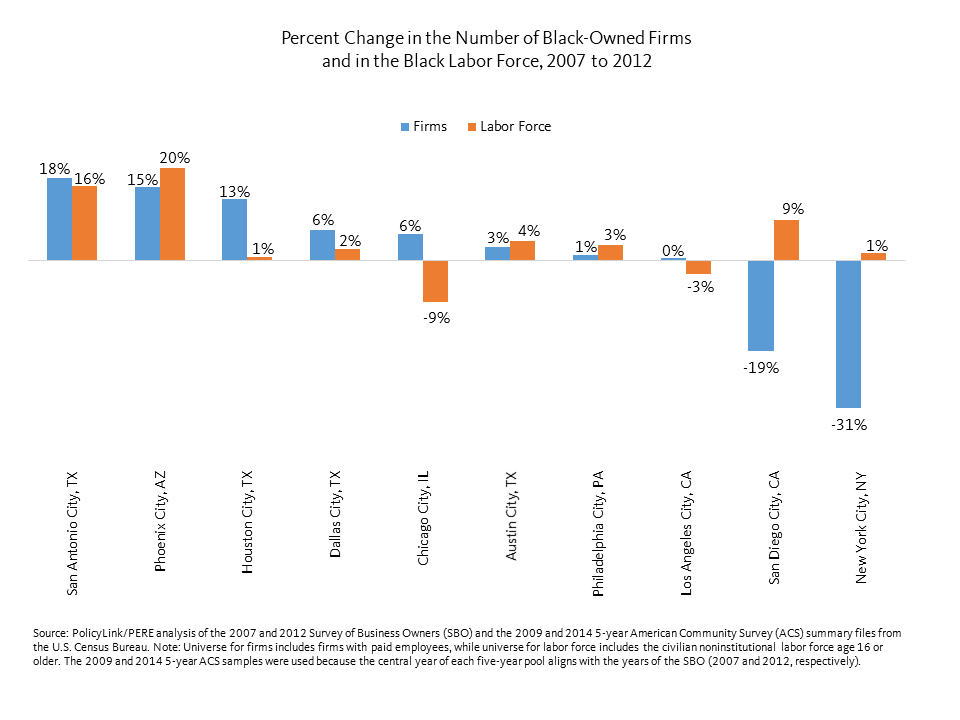 Nationally, the average growth rate for black-owned businesses with employees across the top 100 most populous cities was 19 percent. Across the top 10 cities, growth rates ranged from an increase of 18 percent in San Antonio to a decrease of 31 percent in New York City. Phoenix and Houston also had high growth in Black-owned businesses, while San Diego saw a decline of 19 percent. 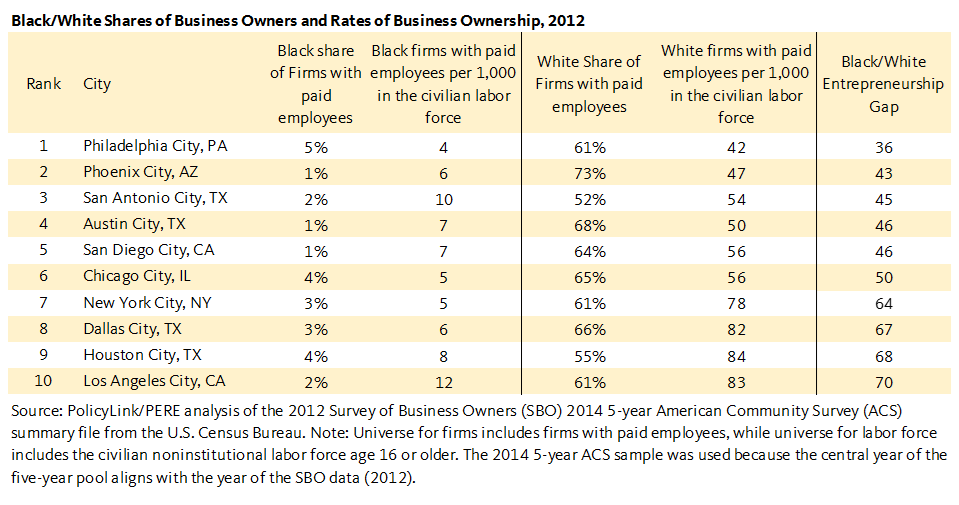 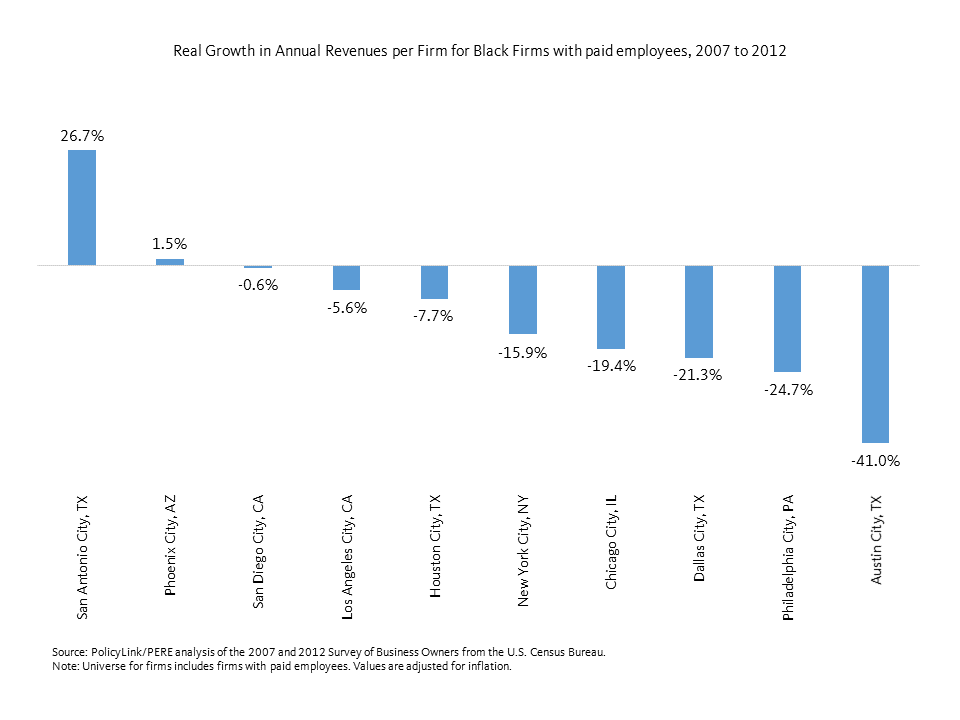 In addition to per employee pay, San Antonio also scored well on other metrics including experiencing the greatest growth in annual sales for Black-owned firms, one of the lowest White/Black Entrepreneurship gaps, and among the largest increases in the number of Black-owned firms and the size of the Black labor force. This diverged from New York and San Diego where annual pay per employee grew despite declines in the labor force. New York was a particularly interesting case because wages grew even while the city had the seventh highest Black/White entrepreneurship gap.

A Need for Equitable Entrepreneurship Strategies

Across the 10 largest cities, there were large racial gaps in Black and White business ownership everywhere, but some cities did show better performance than others. San Antonio showed consistent positive signs for Black-owned businesses on all measures examined: growth in firms, revenues per firm, employee pay, and Black/White gap in entrepreneurship. Meanwhile, New York showed consistent negative signs with the greatest decline in the number of firms, declining revenues per firm, and one of the largest Black/White entrepreneurship gaps.

Certain factors that are associated with increased success in entrepreneurship include wealth, access to capital, and formal and experience-based human capital, which can consist of formal education or experience running family-owned business. Policies and programs that address any of these barriers should help to increase the number of Black business owners and support their long-term success. Finally, incentive programs that lower financial barriers to entry for Black entrepreneurs could help foster business ownership.

To access data on entrepreneurship for your city, region, or state; and to learn more about policies to expand business ownership for entrepreneurs of color, see the four new indicators available in the Atlas: Firm Diversity, Revenues, Business growth, and Revenue growth.